Several years ago we had an intruder who repeatedly trespassed on our property causing damages during the night. Even though I was pretty sure who it was, I was not able to catch him in the act so his behavior continued for much too long before he was finally caught. Now I have the 1byone Wireless Alert System with 2 Motion Sensors, Alerts You Anywhere Inside Your House to help protect my home and property. 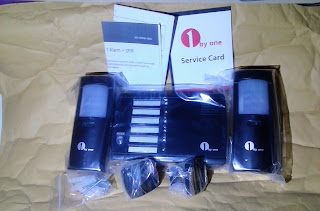 This alarm comes with a receiver and 2 motion sensors which can be strategically placed in a variety of locations to best catch intruders who cross their path. Also included in the package are instructions and everything you need to mount your alarm system. The system is powered by 3 AAA batteries for the receiver and 3 more AAA batteries for each sensor for a total of 9 batteries. These are not included with the system, but are relatively cheap and easy to find at most stores. You may choose to use an AC adapter to power the receiver if you prefer.

The system is easy enough to mount, using the two included mounting brackets and the provided screws. Just attach the bracket to your wall, pole, or fence with the screws, then slide the sensor onto the bracket. These have a good swivel range so you can position them exactly where you want.

Each sensor can be programmed separately so you know exactly which area of your yard has been entered. You can also set them to different alarm settings. I found that two of the alarms were loud and annoying, while the third was not bad so this is the one I chose. If I were to install the receiver were to be placed in my garage or in a store rather than in my home, the siren type of alarms might be better, but were not what I wanted in my home.

Although the system did come with instructions, it still took me a bit to get everything figured out and set up correctly. I guess I never have been good at following instructions though, so it may have just been me.

Once the alarm was programmed and the motion sensors were set, we got to test this out. The receiver can be up to 150 meters from the sensor and picks up the signal very well. The motion sensors can detect motion up to about 8 meters away. My first attempt needed a slight adjustment to avoid the detection of traffic along the road.

Once adjusted it worked perfectly, detecting only those who entered the yard. The volume can be adjusted up to 80dB as well as down to a silent flashing light, so you can set it to whichever works best for you. I think that this is a great setup to keep my home secure.

Although I was offered this product at a discount or received a complimentary sample in exchange for my fair and honest review, all thoughts and opinions on the products I review are always my own and have not been influenced by any discounts or samples which may have been provided to me for testing purposes. Questions and comments are welcomed.