I love using this Activated Charcoal Odor Eliminator 200g Bag By Moody Zook to eliminate odors in my refrigerator. 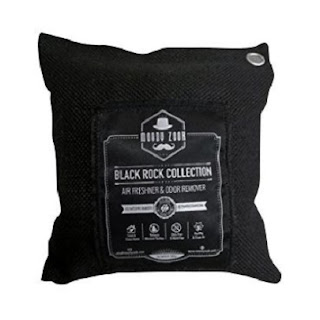 The activated charcoal absorbs the odors so my refrigerator doesn't smell like onions, or any of the other strongly scented foods that are put into it. I just tucked the odor eliminator bag into the door of my fridge and don't have to worry about strong odors. This works so much better than the old box of baking soda that I used to keep in there. I don't have to worry about this spilling and making a mess, and it really absorbs the odors so much better than the baking soda ever did.

In addition to placing this in a refrigerator, there are many other places where this odor eliminator would be useful.You could place it in your car, near your trash or litter box, or any other area where you have an odor problem. The bag is easy to tuck it into a smaller area, and it also has an eyelet in one corner which makes it easy to hang if you prefer. I love the activated charcoal products for removing odors, and have used other similar products as well. I much prefer this type of product to the perfumed ones that try to mask odors. This product does not simply mask odors. It actually eliminates them.

Although I was offered this product at a discount or received a complimentary sample in exchange for my fair and honest review, all thoughts and opinions on the products I review are always my own and have not been influenced by any discounts or samples which may have been provided to me for testing purposes. Questions and comments are welcomed.